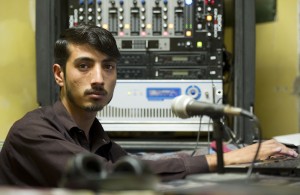 The Afghan DJ in his studio in the combat outpost Sar Howza (Photo: Heimken)

Today, we did an interesting story on an Afghan DJ who runs a radio station on camp, for the population outside the wire. The station was set up by ISAF. Interestingly Iranian music seems to be all the hype. It’s what the 20-year-old plays a lot.

Apart from playing music he also reads out news he gets from the 3-66 Battalion headquarters in Sharana and he reads out jokes every now and then. It must be hard for him living on base with all the Americans, the only company he has are the interpreters working for the unit.

Captain Perkins and his two platoons came back inside the wire, the outpost, from their five day mission yesterday evening. The company’s cook made them a special welcome meal – lobster and steak – to greet the men that were living without showers and good food for almost a week.

When the MRAPs and armoured transporters came rolling through the gate and the soldiers started dismounting we met a couple of familiar faces. Some greeted us recognizing us from when we last met them at the casing of the colours ceremony in Grafenwöhr in Bavaria at beginning of June. 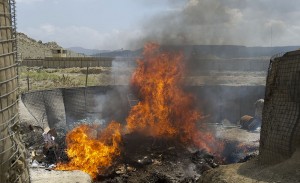 We’ve been in the combat outpost for three full days now. On a normal day it’s already hard to breathe at 2700 meters above sea level. Today it’s almost impossible. Thick toxic fumes billow through the outpost.

It’s trash burning day. All waste goes into a pitch by the perimeter of the outpost. A sergeant pours fuel onto the black plastic bags that have been collected from all over the post. The wind carries the fumes of burnt waste through the base.

Earlier in the day, I had long chat with mechanic and shop foreman Sergeant Bruce Anderson, sitting on the wooden veranda just outside the tactical operations centre. Here the soldiers congregate to smoke and have a chat. They even built a rocking chair. They’ve got a big black plastic box with a frog and a pet tortoise called “Little Mac”. 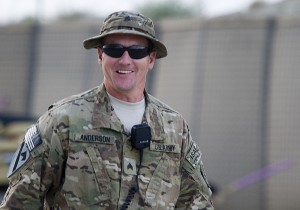 Anderson is 37 and has a broad southerner drawl, he likes beer and rides dirt bikes in his past time. He joined the army in 2004 and was first deployed to an unusual area of operations – the 2005 debacle in New Orleans caused by hurricane Katrina.

He says the hardest thing about being deployed is being away from the family, or rather making your loved ones worry for such a long time. He’s got two kids and a wife. He, likes most of the other soldiers here, have been very welcoming.

We feel pretty safe on the combat outpost. It doesn’t really feel like a war zone here. The world behind the barbed wire seems remote. We haven’t left the wire, the COP, since we got here. But company commander Perkins has promised to take us out, to see the village of Sar Howza and the outposts, they have set up during their mission.

In the evening the sub-governor of Sar Howza, the local police chief and the deputy chief of the afghan intelligence agency in the district came to visit and exchange some courtesies on the veranda in front of the TOC.