You and your fear are fenced in together. Nowhere to run to (Photo: Loesche)

A week after our return to Germany I’m still pretty knackered. Our embed with the Apaches in the dusty country called Afghanistan just lingers there, hasn’t completely sunk in yet. It was a physical and mental challenge, bigger than I had anticipated.

For now, I have found refuge in the microcosm of the work office, where things are orderly and clean and predictable. This is the settling back into “normal” life, the Western world wants the Afghans so desperately to share with us.

I like being back in Germany where people stand for five minutes at the red lights at the pedestrian crossing even though there are no cars to be seen for miles. On the other hand, I hear, the army sends their soldiers to some Mediterranean resorts to decompress for a week. I could have lived through that, no question! 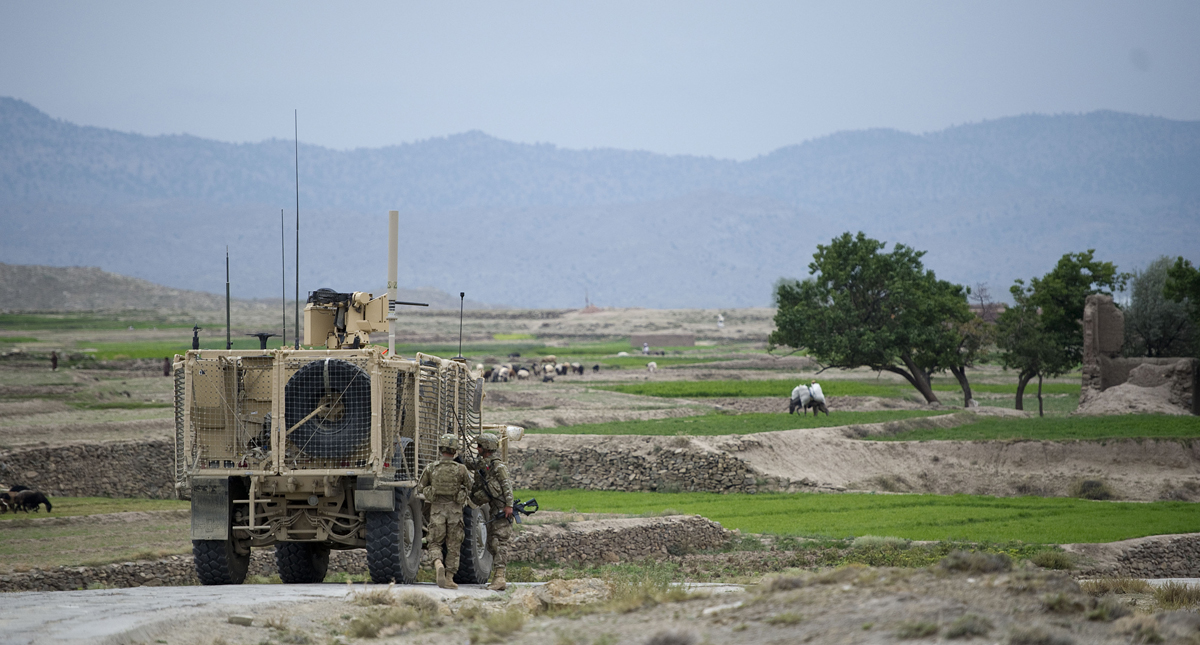 A so called MRAP standing just outside Sar Howza on the day we visited the former girls school. I like this one, because it has a somewhat deceptive feel of tranquility to it (Photo: Heimken)

Afghanistan must be one of the most challenged countries in the world, at least the parts we got to see. This is by no means the fault of the general populace, but there are powers hard at work keeping this country down – they’re not just foreigners.

As Staff Sergeant Meredith of Apache Company 2-28 said, there are many men in powerful positions, who are not interested in educating their subjects out of fear they might start to want a piece of the pie.

War as a way of life
END_OF_DOCUMENT_TOKEN_TO_BE_REPLACED 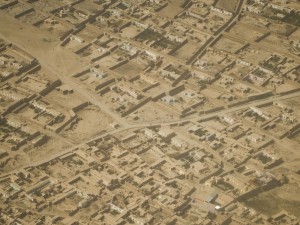 We are finally out of the country. After 21 days. I’m sitting at the gate in Dubai typing this. It’s politically not correct to say, but when I was flying in to this filthy rich country shortly after 11.00 a.m. and I could see the well paved roads, the traffic, the high rises, I was just very glad to be back in “civilisation”.

We knew we could have trouble getting from the military terminal in Kabul first to the military main gate, which is a few kilometres down the runway, and then after passing through the security check point manned by the Belgian paras, getting onwards travel to Kabul International, the civillian part of the airport. 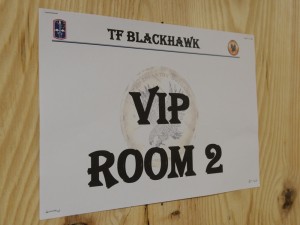 Finally, the full V.I.P. treatment on our way back through Sharana (Photo: Loesche)

Meanwhile, Axel and I are back in Kabul. We arrived here yesterday at the military part of the airport. We are scheduled to fly on tomorrow in the morning to Dubai. The further we get from our embed, the more we wind down. Now, that we have some time to gather our thoughts, we slowly realise how exhausting this journey really was.

We left the COP Sar Howza late on Saturday after we had the encounter with the mullah and mujahedeen Tuti. We were driven to the 172nd’s headquarters by MRAP convoy to Sharana and got there at around 22.00. The brigade’s PAO Major Buccino was waiting for us. He showed us our rooms. I was lucky to get room V.I.P. 2 this time. (About time. Buccino had been promising us the whole V.I.P. treatment since we first got here!). 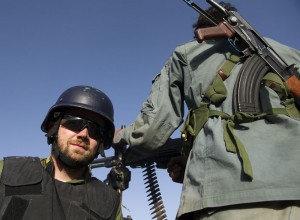 Bad ideas make for good photos! On the pick up next to the Afghan police gunner (Photo: Heimken)

Our embed with Alpha Company 2-28 in Sar Howza ended with a highlight. On Friday afternoon we found ourselves riding a green Afghan police Ford pickup truck with one of the most respected – and probably feared – mujahedeen of Eastern Afghanistan.

In the early afternoon a convoy of MRAPs left the base in Sar Howza heading down the main road to Orgun. I for the first time was riding in the armoured lorry the soldier’s call a LMTV. It’s more spacious and you have a much better sight out the windows than sitting in an MRAP. The downside is: you have much less protection against IEDs or RPGs.

Our mission was to deliver a metal dam gate to a remote village to the southeast of Sar Howza called Shatowry, not that far from Paktika’s biggest city Orgun. The unit that had been manning the COP Sar Howza before 2-28 took over in July got into a heavy fire fight with insurgents when they attempted to do the same in June. 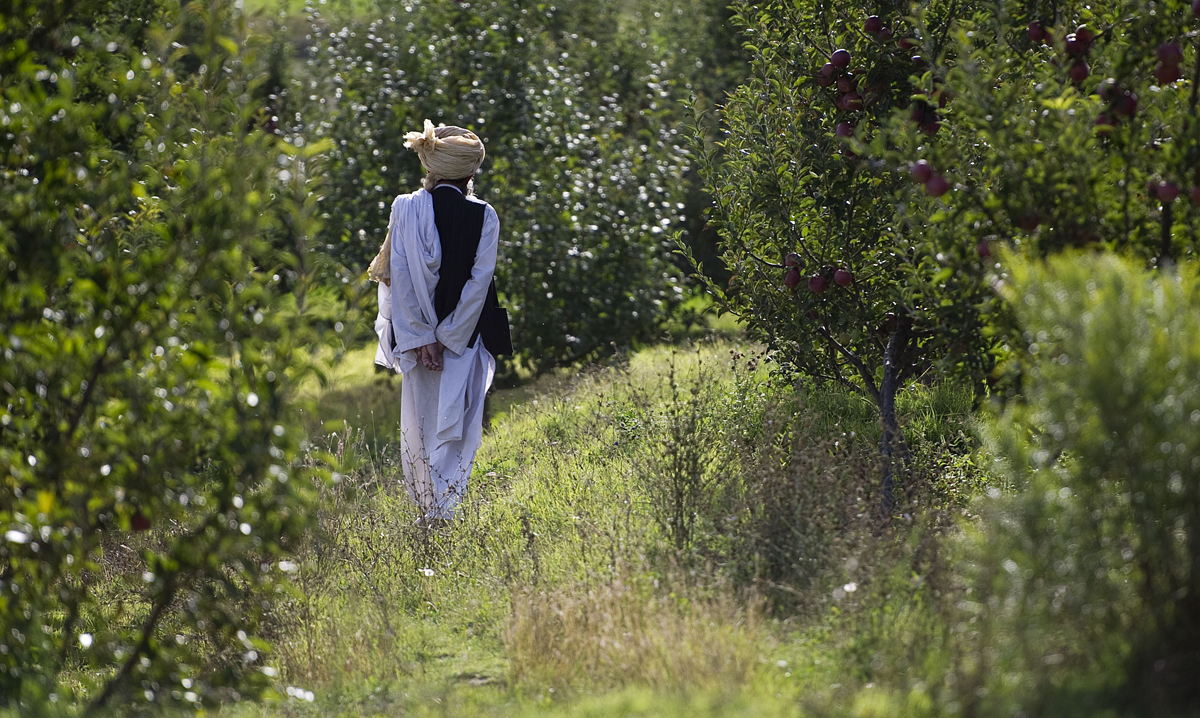 An elder walks through an orchard in the village of Shatowry, home of mullah Tuti. We actually were given some apples. They were tasty (Photo: Heimken)

END_OF_DOCUMENT_TOKEN_TO_BE_REPLACED 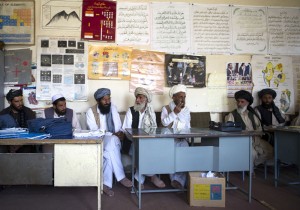 Today, we first drove to Sharana and then on to Mata Khan, a much smaller combat outpost than Sar Howsa. I had fun listening to Frank Sinatra, Black Sabbath and some country tunes on our way over via an iPod connected to the intercom.

Mata Khan is home to the 1st Platoon of Captain Perkins Apache Company 2-28. The country side surrounding it is completely flat, unlike the Sar Howza region. Although it’s only about 15 to 20 kilometers away, the climate feels different too. It’s much warmer, at least 15 degrees Celsius more.

There’s much more arable land here. We drove past some really impressive castle like Qalats, big square compounds with high mud walls and small turrets on each corner. I guess they reflect the mentality of the people living in this region. Everybody who is wealthy enough protects their fortunes out of sight. Their home really is their castle here.

It might be a testament to the fact that there is no centralised authority, called the nation state that has vowed to protect private property and enforce sanctions against people who don’t respect that right. By now there are such institutions in place in Afghanistan, but they are young and not welcome by everyone. The province of Paktika is known for being stubbornly anti-government. 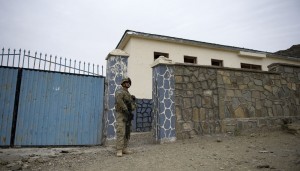 The deserted compound of a girls school in Sar Howza (Photo: Heimken)

After we went on patrol to the bazaar on the outskirts of Sar Howza on Monday, 3rd Platoon took us out to what used to be a girls school today. We got the usual briefing by the mortar pit before leaving. The school is infamous for having Taliban graffiti sprawled over the inside.

Apart from being told to watch out for IEDs by the graveyard the guys were warned by Lieutenant Wood and Staff Sergeant Nuñez not to get pissed off if the kids started pelting them with rocks again.

If the Afghan police who were to join the parade started firing in the air to scare off the youngsters, then so be it. This was there country. The soldiers were told not to hand out any presents. It hadn’t worked out last time, added Wood.

We spent two days under so called blackout conditions. The armed forces have a strict policy of shutting down all means of communication, from collecting mobile phones to capping the internet connection. They want family members to be informed about any killed relative by an official source, instead of rumors being spread.

We only got sketchy information about one service member being killed in Paktika late on Saturday. I haven’t been able to confirm any such news on the internet after it came back on this morning. 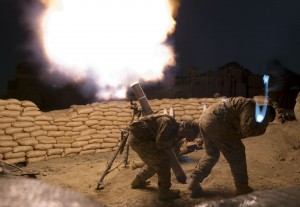 On Saturday night we were standing right next to the mortar pit when they were firing illumination rounds out of their 120 Millimeter tube, lighting up the three Kilometre corridor between the base and the town of Sar Howsa. They shot at least ten rounds into the night sky – for show of force more than anything.

The assistant gunner steps to the mortar. The NCO tells him to “hang it” and the gunner will place the round into the tubes opening. After he’s commanded to fire, he simply lets the round drop into the tube. Where the rounds initial charge explodes and the grenade is violently propelled into sky. The loud explosion makes the area the pit tremble.

The illumination rounds break into half over the destined area. The part with the phosphorus substance glides to the ground on a parachute. They changed the direction of fire slightly once. Axel took some awesome pictures of the live firin exercise. 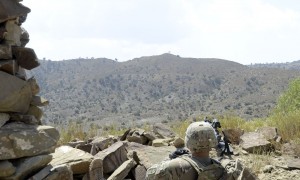 Specialist Gloria from Michigan looking out towards One Tree Hill near the village of Gulridin (Foto: Loesche)

Today, we went out on a mission for the first time since we got here. Lieutenant Chad Christian, 24, from Alabama took us with him in his MRAP to see for ourselves what Captain Perkins and his two platoons had accomplished on a previous five day mission.

A convoy of MRAPs and some Afghan National Police vehicles drove down the asphalted street to Gulridin where a check point by the street and two observation posts high above up in the hills had been set up.

Half way we stopped.

Suddenly the gunner in the turret fired a volley of shots from his machine gun. Empty cartridges tumbled into the air conditioned armoured truck. Shots were going off in front and behind us. The Police had dismounted from their pickup trucks and shot their AKs.

It was a test firing exercise, shortly before we reached the end of the asphalted road. Perkins told me yesterday: “The insurgency starts where the asphalted road ends”. Todsay’s mission was to further fortify the check point to be manned by the ANP – to build a shelter for the police.

While some of the guys started unloading building materials from the cargo truck Axel and I followed Lieutenant Christian up the hill. On the way, we met Staff Sergeant Neal Nuñez, 33, from Los Angeles of 3rd platoon 2-28.

END_OF_DOCUMENT_TOKEN_TO_BE_REPLACED 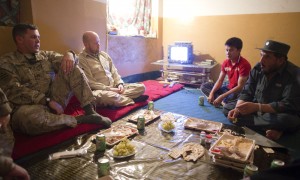 “I’m so full, I can’t breathe when sitting down“. That was my commentary after our first adventure outside the wire.

I had just finished my last blog entry when Axel turned up behind me at the computer booth with a piece of news: He had talked to Captain Perkins and we were invited to join him and two of his lieutenants for a meal with the local police chief in an hours time!

The problem was that we only just had dinner. Two man size burritos with loads of meat and sauce and rice. My first thought was that I couldn’t possibly go have a meal with Afghan dignitaries with the imminent danger of throwing up.

I went back to our hut and lay down to digest the burritos and prepare for some goats meat.
END_OF_DOCUMENT_TOKEN_TO_BE_REPLACED