Our location an a map (Photo: Loesche)

The sun’s out. It’s a little after 9.00 a.m. Axel and I spent our first night in our new home. We slept in a wooden hut without windows, the interior divided into smaller rooms with every compartment having their own door outside. Shortly before midnight we were told off by the one of the mechanics, we weren’t supposed to have our light on because of black out rules.

The combat outpost is about as a big as three football fields. It’s guarded by four Towers. They’ve got cameras on all of them. One of the towers is unmanned and has a remote controlled machinegun on its roof. The perimeter of the compound is made of so called Hescos, huge square blocks made from wire lined with fabric filled with rocks and sand. 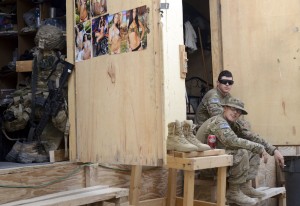 They’ve got everything they need on the base. A kitchen container, a dining facility, a gym where the soldiers were working out last night to heavy metal when I was sitting just outside the exercise room, on one of the computer workstations connected to the internet. They even have a laundry facility where Axel washed his T-Shirts this morning.

Three platoons of Apache Company live here, more than 100 men in total. I haven’t seen any women, like on the bigger based in Bagram or Sharana. The company commander, Captain James Perkins left the compound with most of his men late last week. So we haven’t seen him yet. They are busy setting up check points and observation posts at a vital crossing a few kilometers from here.

When the district governor is not in the provincial capital Sharana he resides on the outpost, the district centre is located on base. So when there are shuras the town elders come to the base to hold the meetings here. We’ve been told that after more than 100 insurgents were killed by US special forces in July just North of here in the mountains they transported the bodies here for biometric screening. 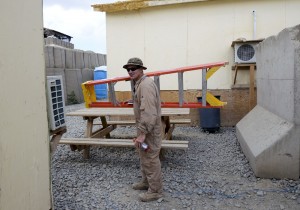 The soldiers who were left behind at the COP seem pretty chilled out. None of them are wearing their flak vests or helmets. The outpost didn’t get attacked for a while. That might change after Ramadan is over since last Friday. Everybody seems surprised there haven’t been any attacks or TICs, troops in contact – fire fights with insurgents.

Where Perkins and his platoons are setting up the posts the insurgents had established check points of their own they just gave up because most fighters went home for the holy month of Ramadan. It would make sense for the insurgent fighters to now come back and fight the infidels and the Afghan National Army (ANA) to regain control of the area.

At one point it looked like we might be able to join Perkins and his men and spend the night out in the field. A convoy with fuel was going to be sent out with resupplies. They didn’t drive out after all so we stayed on base.