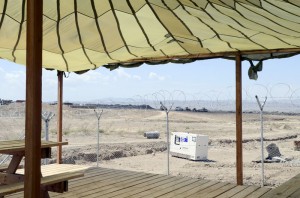 Veranda in the Foward Operating Base Sharana (Photo: Loesche)

We slept in. I got up at 8.30 a.m. Axel and I had breakfast and prepared for our over land travel to Sar Howza. We were driven to the headquarter barracks of 3-66 Battalion and met the commander Lieutenant Colonel Curtis Taylor from Texas in charge of the western part of Paktika province.

We were briefed on the activity in our area and how the war was going in general. The most interesting point he made was that the structure or make-up of the insurgent force was changing. Taylor said that there was a split occurring within the movement.

The older generation of fighters who had joined the mujahedin in the 1980s to fight the Russians was retiring. Incoming were young more radical fighters from Pakistan who Taylor described as a more thuggish type of insurgent who unlike the older generation had less respect for the general populous and wouldn’t care for civilian casualties.

Just after we had our chat in Taylor’s office we met Lieutenant Wolfsley who was going to take us with him to the combat outpost some 10 kilometres from Sharana. The drive would take us 30 minutes.

We were relieved to hear that the threat of an attack wasn’t that great. The road to Sar Howza was paved, which means the insurgents couldn’t bury pressure plates to set off roadside bombs. All the military vehicles also have so called jamming devices which block any attempt to detonate explosive devices via mobile phones.

Four huge Mine Resistant Ambush Protected Vehicles (MRAPs) were waiting for us. Axel got into one, I into another. I drove in the last vehicle under the command of Staff Sergeant Travis Colter, 26, from South Carolina and three other soldiers.
[nggallery id=2]
In those vehicles you feel like driving in a submarine with wheels. They are stuffed full of electronic equipment from radios to fire extinguishers. The armour that protects the passengers from anything from gun rounds, rocket propelled grenades to roadside bombs is probably more than 10 cm thick.

I handed out some beef jerky to break the ice. We rolled past a rugged semi-desert landscape. All traffic that came our way from motor cycles with men with black turbans to battered cars and colourfully painted trucks loaded with firewood stopped ahead of the convoy pulling up by the roadside to let the MRAPs pass.

Somehow the trip was less nerve racking than I thought it would be. After 35 minutes we reached Sar Howza without any incident. When we entered the home of Apache Company 2-28 we had after four days of travel reached our final destination for the trip – some 8300 feet (2700 meters) above sea level. 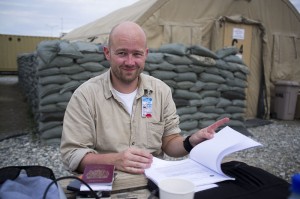 Pretending to work at Kabul International Airport. Relieved to have reached the first base (Foto: Heimken)

It has only just sunk in: I’m in Afghanistan and I’m with the military, going on an embed. It hit me hard whilst sitting on a bunk bed in an air conditioned tent full of US marines, US army and British soldiers and their gear. This is real, and Axel, the photographer, and I are complete rookies in this biz. Glad to have him with me though, may I say.

We touched down at Kabul International at 06:40, landing with the Afghan carrier Safi Air on a misty morning. I hadn’t slept at all since we left Frankfurt at 15:20 with Emirates flying to Dubai and landing there close to midnight – getting hit by 38 degrees Celsius leaving the aircraft.

The malls in the terminal were nicely air conditioned though. We sipped on a café latte from Costa, talking about our plans of what we might be able to cover in the three weeks in Afghanistan. To be honest we didn’t really have a clue what we were in for.