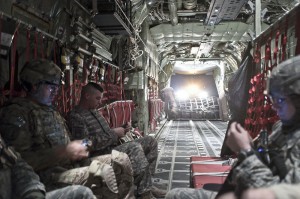 We boarded the C-130 Hercules at around 4.30 a.m. Our first military flight in Afghanistan. The palette with our luggage had just been loaded into the plane (Photo: Heimken)

The flight yesterday to Bagram – well, we didn’t make it. It didn’t take passengers after all – cargo only. The flight after that one – well we weren’t that lucky, they couldn’t take the usual pay load – it was too hot (I don’t know how the correlation works out). So we dropped off the low priority list for the flight: It’s all persons military first, then contractors, then journalists.

At the end of the day we were able to sign up for a 9:40 p.m. flight. We checked our luggage in and were sitting in the terminal watching the Boston Red Sox play on a flat screen. The lady from behind the check-in desk came into the waiting area and announced that due to maintenance work on the runway the flight was going to be delayed six hours.

We grabbed our sleeping bags out of our luggage which already had been put on a pallet ready for transport. Although this is a military airfield the terminal works in principle like any other airport, everybody still has to put their luggage through scanning, which seems a bit strange, because most soldiers travel with their guns at their side.

On the up side of things, we had the first three hours of sleep since the beginning of our journey 25 hours earlier. Then at 3:30 a.m. we were once again sitting in the terminal building, now watching the Animal Planet about mammals going out of control.

We, a bunch of journalists and a few soldiers, got on a bus at 4:30 a.m. rolled to the waiting C-130 Hercules Air Force transporter. It was still dark when we walked up the ramp and took up our seats. Then after us, the palette with our luggage got heaved into the plane by a fork lifter.

The ramp closed. The hall like inside went dark. We taxied across the runway, taking sharp turns. Once the pilot pulled back the throttle the sound of the four propellers rose to a deafening level, we mimicked the soldiers across from us and held on to the netting behind us.

Military transporters from the inside look as if those assembling them weren’t quite finished attaching the interior panels – you can see all the wiring and cables. After 15 minutes we were at our next stop – Bagram Airfield (BAF), the central US transport hub for Afghanistan. It was light when we got of the plane. We had made our first mil flight.

Once again we though we had gotten lucky in Bagram. We were already checked in, our luggage on the pallet for a flight to Forward Operating Base (FOB) Sharana; all systems go, waiting in the holding area, when our names were called up over the loudspeakers.

We were taken off the flight to Sharana at the last minute. We went down to the loading area and collected our bags from the pallet. The provincial capital of Paktika province, where the brigade headquarters of the 172nd Separate Infantry Brigade is located would have to wait.

I called the brigades Public Affairs Officer, Major Joseph Buccino from an internet café of sorts. He said, him and the brigade commanders, Colonel Edward T. Bohnemann, were looking forward to seeing us. Buccino added that there was expected to be a lot of “action” in Paktika, especially after Ramadan had just ended on Friday. The fight was going to pick up.

We took the bus that drives around the Bagram Airfield and rode it for half an hour. We checked into Camp Warrior on the other side of the airfield with the huge runway behind us. We both had our first shower since arriving in Afghanistan.

After getting some good food at the so called DEFAC dining facility we spent the night in a huge tent holding approximately 80 bunk beds, most of them occupied by civilian employees, contractors. Every now and then, we awoke to the sound of a pair of fighter jets roaring down the runway and taking off.

At 09:00 p.m. we rode the bus back to the terminal and were told there were going to be three flights for Sharana tomorrow. One at 1.35 a.m. the next at 5.30 a.m. and the last one at 7:30 a.m. check-in time. We decided to try and get a night’s sleep and opted for the latest flight, taking the risk that if we didn’t get on the passenger list, we wouldn’t make it to Sharana.

Axel and I had a long talk about whether this trip actually made sense at all. Why take the risk and put up with the dangers of a war zone. No picture or story will ever be worth dying for. We left that question unanswered. We turned to fear itself.

Former US-President Franklin D. Roosevelt once said something along the lines that nothing had to be feared but fear itself. That’s not true. Fear shouldn’t be feared because it’s an important indicator that you might be in danger.

We both had our spouts of anxiety and subsequent doubts about our mission. I’m glad I didn’t venture out into this adventure on my own, like I had planned to do at the beginning. Now having somebody to confine tp is extremely important.

We’ve both agreed that we will venture out to the Combat Outpost (COP). We’ll go through to our actual area of operation and then decide what to do or not to do. We have agreed that if one of us doesn’t feel comfortable with either staying on or going on a specific patrol, we both abort mission.